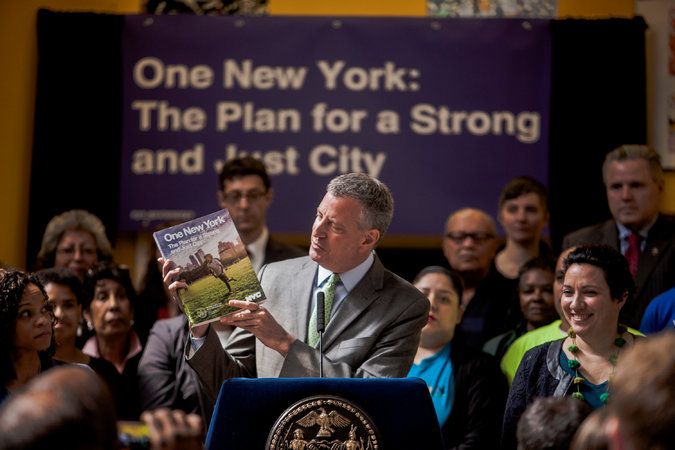 A nonprofit group created by close advisers to Mayor Bill de Blasio to push his political agenda, using unlimited contributions from donors, has stopped raising and spending money and is in the process of shutting down.The group, known as the Campaign for One New York, had raised the ire of government watchdog organizations that said it created a “shadow government” of lobbyists and businesses with interests before City Hall, who gained access and influence through donations outside the purview of New York City’s strict campaign finance laws. Last month, one such organization, Common Cause New York, filed a formal complaint with the city requesting an investigation.But Mr. de Blasio, a Democrat, said on Thursday that the scrutiny of the nonprofit had no bearing on its closing. He said that it had succeeded in its efforts, advocating his universal prekindergarten program in 2014 and an affordable-housing plan that was quite likely to pass the City Council next week, and that the time had come to end its work.

“The work is done,” he told reporters over the din of bagpipes at the St. Patrick’s Day Parade. “That’s the bottom line.”

The existence of the group had become something of a political liability for Mr. de Blasio, garnering unfavorable headlines about its fund-raising, which included hundreds of thousands of dollars from companies with business before the city, and its spending, much of it on political consultants with close ties to the mayor. Its dissolution signaled the beginning of a shift for Mr. de Blasio away from policy fights and toward his re-election campaign in 2017; the Campaign for One New York, which closely coordinated its efforts with City Hall, would have been prohibited from raising money to advocate his re-election.

The group has raised and spent more than $4 million since its creation in 2014, according to voluntary disclosure forms. Donations included at least $1.3 million from unions, including $350,000 that the American Federation of Teachers gave during the mayor’s push to create universal prekindergarten, and more than $1 million from real estate interests, including Two Trees Management and others with interests along the Brooklyn waterfront.

Mr. de Blasio has consistently defended the group and its mission since the early months of his administration. Last month, he said that it should be judged differently from the opaque nonprofits supported by the conservative Koch brothers that similarly grew out of the Citizens United decision by the Supreme Court.

“The Koch brothers are not doing what they’re doing to help kids get pre-K,” he said, adding that another key difference is that his groups voluntarily disclosed their activities.

An investigation into the Campaign for One New York by the state’s Joint Commission on Public Ethics over whether the nonprofit should have registered as a lobbyist last year remains active, according to several people briefed on the matter. The city’s Campaign Finance Board and Conflicts of Interest Board are both considering the formal complaint by Common Cause, spokesmen for the city agencies said, declining to comment further.

In recent months, the Campaign for One New York had begun sending contributions to two other nonprofits connected to the mayor’s agenda, including one focused on housing, United for Affordable NYC, and another aimed at advancing Mr. de Blasio’s national political goals, known as the Progressive Agenda and based in Washington, according to voluntary disclosures by the group.

A spokesman for the Campaign for One New York, Dan Levitan, said that most of the money raised by the nonprofit had been spent, with the most recent spending going to United for Affordable NYC, and that the remaining funds would go toward the cost of shutting its operations down.

Mr. Levitan declined to make available a list of contributors and spending since January, when the group last made a voluntary disclosure, saying it would stick to the six-month disclosure schedule it had established for itself.

The nonprofit United for Affordable NYC will also begin winding down its operations after the Council vote next week, officials said. That group, created this year, has yet to make any voluntary disclosures, though a spokesman said it had raised most of its contributions from the Campaign for One New York and from labor unions, and had already spent most of what had been raised.

Mr. de Blasio is not the only politician to use such nonprofits, known as 501c(4)s, after the section of the federal tax code that governs their activities, in order to press for policy goals. The list includes Govs. Andrew M. Cuomo of New York, a Democrat, and Chris Christie of New Jersey, a Republican, as well as the governor of Michigan and the mayor of Los Angeles.

Stephen Spaulding, the senior policy counsel at Common Cause in Washington, heralded Mr. de Blasio’s move, saying it appeared to be a first by an active politician. “I haven’t seen that,” he said. “You’ll see them wax and wane.”

The winding down of the Campaign for One New York, reported by The Wall Street Journal, heartened supporters of Mr. de Blasio who viewed its existence as a stain on the administration.

“This murky entity had been a distraction from the good work the mayor is doing, and runs contrary to the principles he has otherwise exemplified as a candidate and in office,” said Bill Samuels, the founder of the government reform group EffectiveNY and an ally of the mayor. Ending its operations, he said, was “clearly the right decision by the mayor.”